Print Save to calendar
Location 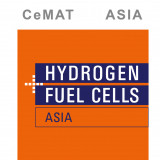 Deutsche Messe as the organizer of HANNOVER MESSE and Tobias Renz FAIR have been organizing Hydrogen + Fuel Cells EUROPE at HANNOVER MESSE for 25 years. The event became Europe's largest and most important hydrogen and fuel cells exhibition with more than 150 exhibitors from 25 countries on 5.000m² every year.

There are many synergy effects between the intralogistics and the hydrogen and fuel cells industry. More than 20.000 fuel cell-powered forklifts are already in use in several countries worldwide as an alternative to battery forklifts. As a driving force of energy transition, China is expected to achieve large-scale deployment of hydrogen infrastructures and fuel cell applications outlined in its 13th Five Year Plan (2016-2020). We just think it is the right time at the right place.